Indians Muslim Association – IMA Youth Wing, in cooperation with Grand Mosque, Ministry of Awqaf & Islamic Affairs, Kuwait, organized a program, “Youth Convention – The Beginning of a New Era”, to mark the end of their 6 months long campaign, Prevention of Wastage of Resources, on 09 December, 2016, at Jamiyath Al-Islah Hall, Rawda, Kuwait. Mr. S. Ameenul Hassan (PhD), a visiting Islamic scholar from India, graced the occasion as the Chief Guest and Guest Speaker. He shared the dais with Dr. Waleed Al-Shoaib (General Manager – Masjid Al-Kabeer), Moulana Abdul Qadar Umri, Masood Shihaab, (President – IMA), Hassan Noor (Vice President – IMA), Mr. Sharfuddin Soofi, (Incharge of Outreach Dept. – IMA), Mr. Aijaz Ahmad (Managing Director Sahara Air-Conditioning Co.), and Mr. Abdul Efam, Secretrary, IMA-YW.
The event also witnessed the launch of IMA Youth Wing’s Magazine to give a brief introduction of the major campaigns and events conducted by IMA YouthWing, Kuwait, from the year 2006 and various topics related to the campaign.
The event started with singing of Kuwait’s National Anthem followed by a beautiful recitation of Quranic verses by Master Abdul Rahman student of 6th standard. The event was hosted by Mr. Mohammad Meraj, who welcomed the audience with an Urdu couplet. Mr. Sharfuddin Soofi was the first dignitary to speak on the occasion. He spoke at length on the topic, Prevention of Wastage of Resources. He urged the people, especially the youth present, to conserve and avoid wasting resources – both reversible and irreversible – natural and artificial. His enlightening talk was followed by a beautiful tarana by Brother Musaib, Zonal President, Khaitaan, IMA YW.
Moulana Abdul Qadar Umri spoke on the topic, “Fastabiqul Qairaat – Compete Each Other in All the Things that are Good”. He encouraged the audience to compete each other in doing good deeds and gave the glad tidings to all the people who take up social services to help the needy and poor.
Eng. S. Ameenul Hassan (PhD), the Chief Guest of the event, spoke on the central theme of program – The Beginning of a New Era. He said the world will change to better only when the youth realizes their responsibilities and strive to work for the betterment of one and all. He lauded IMA Youthwing and expressed his pleasure for taking up the initiative to involve the youth actively in conservation of environment and be careful in utilization of all resources.
Masood Shihaab, President – IMA, concluded the program with Vote of Thanks and supplication to the Almighty. Dinner packets were distributed to all the participants and audience. 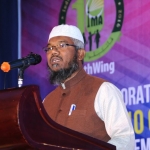 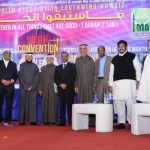 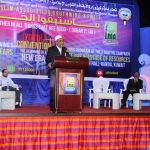 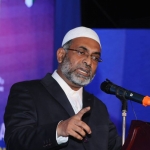 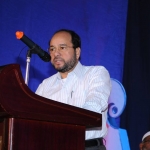 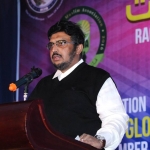 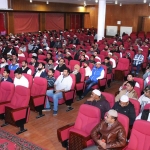 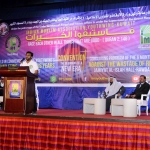