Indian Muslim Association (IMA) – Youth Wing, Kuwait, in cooperation with Masjid Al Kabeer, Ministry of Awqaf & Islamic Affairs, Kuwait, is running a campaign from June 2016 to Nov 2016, commemorating its completion of remarkable 10 years in Kuwait. The theme of this campaign was carefully selected to fight against the wastage of resources and fighting the evils in the society by being moral, ethical and responsible towards nature.

The campaign was launched in Ramazan (17th June 2016) in Masjid Alghanim Khaitan during an iftar party attended by over 1000 guests. As a part of this campaign, a sub campaign with the theme “Islam is Green” was run in the month of October 2016. The campaign on importance of environment and greenery concluded on 21st October 2016 with a program in Omariya Garden, which was attended by over 200 Youth from various parts of Kuwait.

After Friday prayers the audience gathered in Omariya Garden where lunch was served and then, the program started with a beautiful recitation of Holy Quran by Br. Badar. This was followed by a speech on the campaign’s main topic “Islam is Green” by Mr. K.S. Mohiuddin who is a HSE Specialist in KOC and is very active in promoting HSE related activities. He explained how deforestation is adversely effecting our lives and how going green can be fruitful for all inhabitants of earth.

Mr. K. Gangadhar Principal of ICSK Khaitan gave a short talk expressing his happiness on attending such a wonderful program. He was delighted to know that Green color is associated with Islam not just for painting Masjids but also it is associated with green environment. Eng. Mohammed Abdullah Rasheedi, RLE (Garden District 7) gave a short speech in Arabic encouraging the youth to do more of such activities. After the speeches, mementos were presented to the distinguished guests By Mr. Arshad Habib and Mr. Rafat Ali (IMA)

The guests inaugurated the activity of tree plantation by planting 2 Trees in the garden. From there the entire audience along with Eng. Mohammed Rasheedi went to Al-Siddiq area where all the attendees planted 500 saplings. This activity was carried out with full enthusiasm and many children also actively participated to make the event a success. After the planting of saplings, the event concluded by distribution of refreshments sponsored by Al-Yasra foods.

The entire program was convened by Br. Riyaz Khan and guidelines / safety measures for planting trees on the road side were given by Br. Wasif Hashmi. 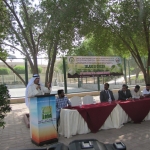 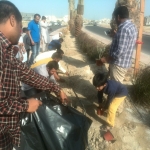 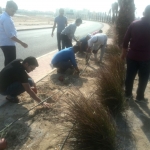 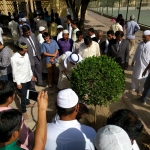 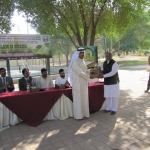 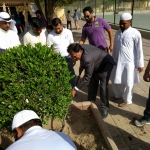 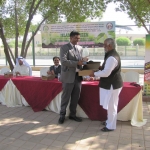 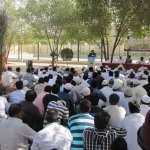 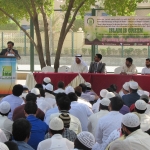 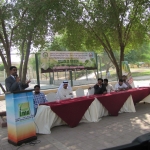