The convention started with a beautiful recitation of Surah Al-A’la (The Most High) by Ms. Ifra Hashmi, followed by an array of inspiring speeches by the luminous dignitaries. Brother Hassan Noor started the series with the welcome speech in which he congratulated the youth for the success of their hard work and support given to make this campaign a successful one. An Introduction of IMA YW by brother Mohammed ZabhiUllah Khan followed this.

Brother Layeek Ahmed Khan, gave a thought provoking speech emphasizing that a person is born alone but he cannot live alone, he has to be attached with
an organization so that he can enhance himself. His enhancement will not only help him achieving his goals in this world but also will help in the world after death. By achieving his goals he will be ready to contribute some good to his organization and the society.

After this was our first main topic “Confidence through Self Hypnosis” – Mr. Suhail Ahmed Shaikh. He started his session by introducing hypnotism and then explained the power of a human mind and its capacity to perform. He showed what could be achieved by just a little concentration and effort. He started the hypnosis session with 2 small exercises as a warm up and then took the audience into the world of hypnotism. The entire audience closed their eyes and were taken into a world of imagination which was so beautiful and mesmerizing that by the time they opened their eyes most of them were feeling relaxed and stress free. With this he concluded his talk and promised for future sessions in association with IMA YW.

This was then followed by the second main topic conveyed by none other but our chieft guest Mr. Iqbal Hussain, The National President of SIO India. He gave a short speech on the campaign, which IMA YW was running for the last 3 weeks, “Hayya lal Falaah – Rush Towards Success”. He emphasized that to come towards success we need to correct ourselves, follow the instructions of Quran and footsteps of Prophet Mohammed (SAWS). He gave glad tiding to the audience that IMA YW is giving THIS platform to all who whish to improve them selves in this world and to be successful in the hereafter. He mentioned that IMA YW can be the light in the darkest hour of an individual that can guide him to walk on the straight path i.e. to walk on “Sirat-ul-mustaqeem” as mentioned in the Quran. Finally he concluded his speech by appealing the audience to join hands with IMA YW and rush towards success.

Finally the program concluded with dua by convener Br. Wajid and with the distribution of dinner packets. 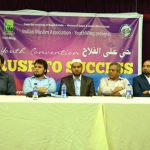 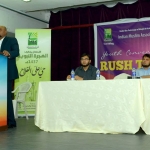 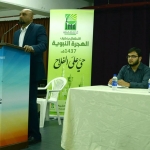 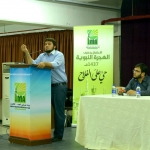