The Grand Cricket Tournament, which was inaugurated last Friday on 13th November by IMA Youth Wing, was concluded with exhilaration in the early hours on the 20th of November 2015, at Khaitan.
The tournament, which comprised of 16 of the best teams from all over Kuwait, was run parallel in Khaitan and Fahaheel, where KCEC team beat all their opponents to emerge the top team in Khaitan while Kharafi National team did the same in Fahaheel.
The grand finale was played between these two teams with 10 overs per side. Having elected to bat first, Kharafi National team put up an impressive score of 90 runs on the board. In response, KCEC team progressed at a steady pace, losing wickets at regular interval. The mood was tense with 12 runs required to win of the last over. However, KCEC put up top notch performance to finish the game, at 94/5 with 3 balls to spare, and be crowned as the champions.
The presentation ceremony commenced thereafter, which began with the recitation of the Holy Quran by Br. Tayyab Mohammed. Br. Adnan Tonse hosted the ceremony with vigor and congratulated both the teams for showcasing great sportsmanship and talent throughout the tournament. The honored dignitaries of the dais were then welcomed and introduced; namely, Cheif guest Mr. A.K Srivastava- second secretary to the Indian Ambassador of Kuwait, Mr. Karim Irfan- Managing director of General trading and contracting Co., and Mr. Muzammil Malik- renowned businessman and industrialist. Mr. A.K Srivastava congratulated and inspired the participants with his motivational talk before moving onto the prize distribution.
Mr. Karim Irfan handed out mementos of appreciation to the ground staff and organizers of the tournament for the job well done. Mr. Muzammil Malik then handed out the runner up trophies to each member of the Kharafi National team. The winners of the tournament, KCEC team, were awarded the champions trophy by the chief guest Mr. A.K Srivastava himself.
IMA Youth Wing then proceeded to honor the guests with mementos. Mr. Rafat Ali, Arab PR secretary IMA, presented the mementos to Mr. Karim Irfan and Mr. Muzammil Malik respectively. Mr. Hasan Noor, Vice president IMA, and Sheik Ilyas, President IMA Youth Wing, collectively presented the memento to the chief guest Mr. A.K Srivastava.
All throughout the finale, a large crowd of supporters and cricket enthusiasts cheered and motivated the teams. They were thoroughly entertained with the display of athletics and skills and gave a thunderous round of applause to both the teams at the presentation ceremony, leaving them yearning for more until next year. 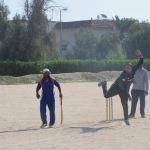 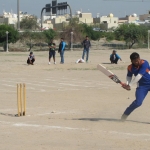 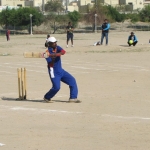 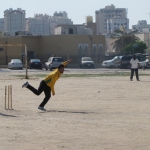 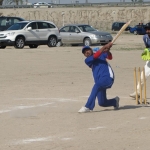 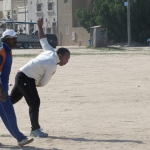 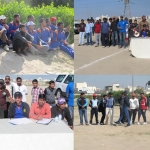 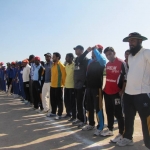 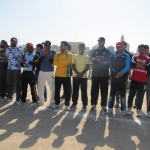 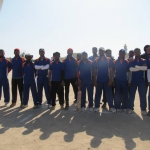 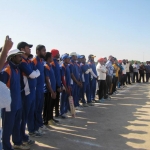 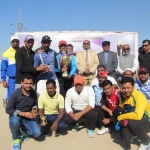 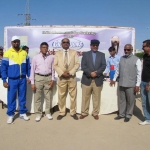 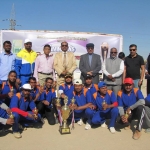 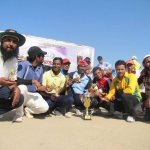 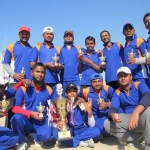 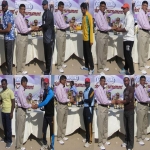 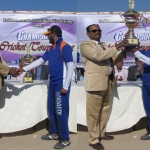 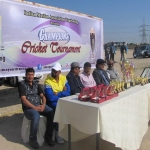 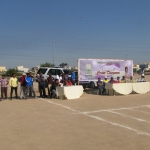 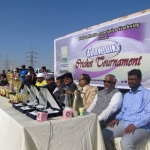 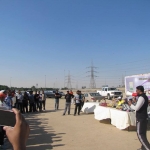 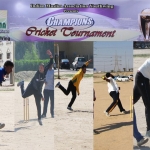 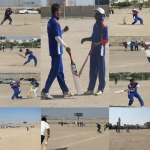 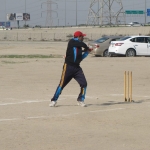 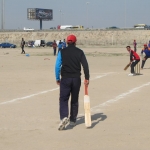 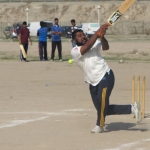 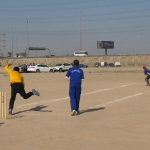